These videos are provided as a reference. They do not represent official policies or rules and cannot be used to justify actions to tournament officials. Please read the Season Standards Manual and FLL Challenge Documents for official rules at events.

CVR was testing new video recording equipment, and unfortunately we were only able to get functional recordings out of the sessions in the Alta Sierra MPR. We apologize for any inconvenience.

These documents are provided as a reference. They do not represent official policies or rules and cannot be used to justify actions to tournament officials. Please read the Season Standards Manual and FLL Challenge Documents for official rules at events.

These notes are provided as a reference. They do not represent official policies or rules and cannot be used to justify actions to tournament officials. Please read the Season Standards Manual and FLL Challenge Documents for official rules at events.

How much time do we need to dedicate per week?

Are there process guidelines to move the kids in the right direction?

Robotics kits have instructions and seems to push kids to build the robot in a particular way, so what do you think is the best way to approach building the robot?

How do you organize the team? Do you split up the returning members from the new members or put them together?

Talk to us about your biggest challenge, and rewarding moment.

Judging wise is it better to have all kids familiar with talking or a few kids focused on that, and everyone else working on the project?

What suggestions would you have to get kids to work with core values and how are they judged?

Do giving gifts affect the team’s score, and are they tracked?

Would you recommend using one place for meetings or different places so kids know how to set up and take things down?

I heard about flags. Is it a new thing this year?

Where are the forms?

Can we send forms in before registering for events?

On the registration process, is it a free for all?

How long does it take for the registration forms to be cleared?

On the scrimmage, is it all first come, first serve?

On the scrimmage, is it just the robot game?

For the school teams, leader manages how big of a team?

How do you take care of the financial cost? How much does it cost?

What are the software requirements?

Does it work on Windows 10?

What software/program is better. EV3 OR NXT?

What is the program block referring too?

It’s your 3rd year of programming. How deep did you get into the programming?

Can you make the robot run a fraction of a revolution?

The power is speed?

Can the robot be only made from lego pieces.

When you are judging the coding, do you look at the laptop?

What is FLL Judging?

What are FLL Judging Sessions?

What are the three judging sessions?

What is Gracious Professionalism?

Where can I find the rubric research?

How do you know if you have completely addressed the research?

What is mechanical side of judging?

What is the programming side of judging?

What are the rules on adding stuff?

What happens if the game is set up wrong?

Can a younger child join?

What is the judging philosophy?

What are some important points regarding Trash Trek Project?

What are some example research topics?

What are some helpful tips?

Do judges look at posters?

What are the key takeaways?

What is a good way to show judges your research?

Do you have to share with a professional or a member of the community?

Should they memorize the presentation?

Do all 9 kids have to present (large teams)?

Can parents help bring things in?

How much training to judges need to have?

What is used in sorting recyclable stuff?

How is it separated?

What are the most common contaminated materials?

Is left over food and liquid in paper plates and cups considered contamination?

The page below is preserved for those interested in the details of the FLL kickoff. If you would like to see recordings or notes from the kickoff, please use the tabs above to navigate.

Central Valley Robotics formally invites all Central Valley FLL Teams to join us for the 2015 FLL Kickoff on August 29th, 2015 at Alta Sierra Intermediate. Prior to the keynote in the morning will be networking opportunities for new and veteran coaches. The festivities officially start at 8:30 AM with the keynote from the CVR Director, Michael Adam. Following the Keynote will be three 50-minute training sessions for coaches to attend. (See below for details on the sessions). Starting at 12PM will be a lunch networking break with lunch trucks on site. Finally, at 1:15pm CVR will host the Robot Game Deep Dive to cover the 2015 Robot Game in detail.

We recommend every team send two attendees to attend all of the concurrent sessions.

FLL Coaches and Mentors (Content will be geared towards adults, not children)
RSVP Below

Annual Kickoff Event to learn about the 2015 FLL Season in the Central Valley. Coaches can attend sessions on a variety of topics to help them this season. See below for more information.

The day is broken up into three parts:  the group keynote,  the break-out training sessions, and the Robot Game Deep Dive.

(This is an optional session). In this session, CVR will introduce FLL and FIRST to new teams and coaches. We will cover the basics of the program and what to expect throughout the season.

The opening keynote will be hosted by Michael Adam, Director of Central Valley Robotics.  He will discuss the changes to the FIRST LEGO League program in the Central California Area, the updated tournament registration process and policies, and other regional changes.

Join our judging team as they introduce the judging and deliberation process at our events. This session is geared for new coaches and will cover the basics of FLL judging.

New or inexperienced coaches are invited to come and ask questions to a panel of veteran coaches. These folks have been through everything you’re about to go through and this is the best place to ask for their advice and insight from seasons past.

Join our judging team for a deep dive into the judging process. They will cover tips and tricks for coaches, as well as host some mock judging sessions.

Join our technology team as they demos all of the online tools available to teams this season. This includes the CVR website, TeamConnect, firstlegoleague.org and more.

Join our judging team as they facilitate a question and answer forum with industry experts from fields relating to the TRASH TREK problem. Connect with experts and develop connections for your team to share their innovative solutions.

CVR Staff will provide an overview of programming using LEGO MINDSTORMS software. Coaches will have a chance to get their feet wet before introducing the software to their teams.

Following the sessions, CVR will host a lunch for coaches to network with other coaches and CVR staff.  There will be discussion groups moderated by CVR staff during the lunch period.  Please suggest topics for these lunch sessions when you get your tickets.
During the lunch period we will have Locavoria out to serve lunch, as well as some local vendors and FRC teams.  Be sure to network with the local FRC team in your area to partner for mentors and support.

This year we are bringing our Robot Game Deep Dive to the Kickoff! We will be going in-depth into the rules, missions, and robot game updates. We will discuss the Robot Game procedure and what to expect at events. 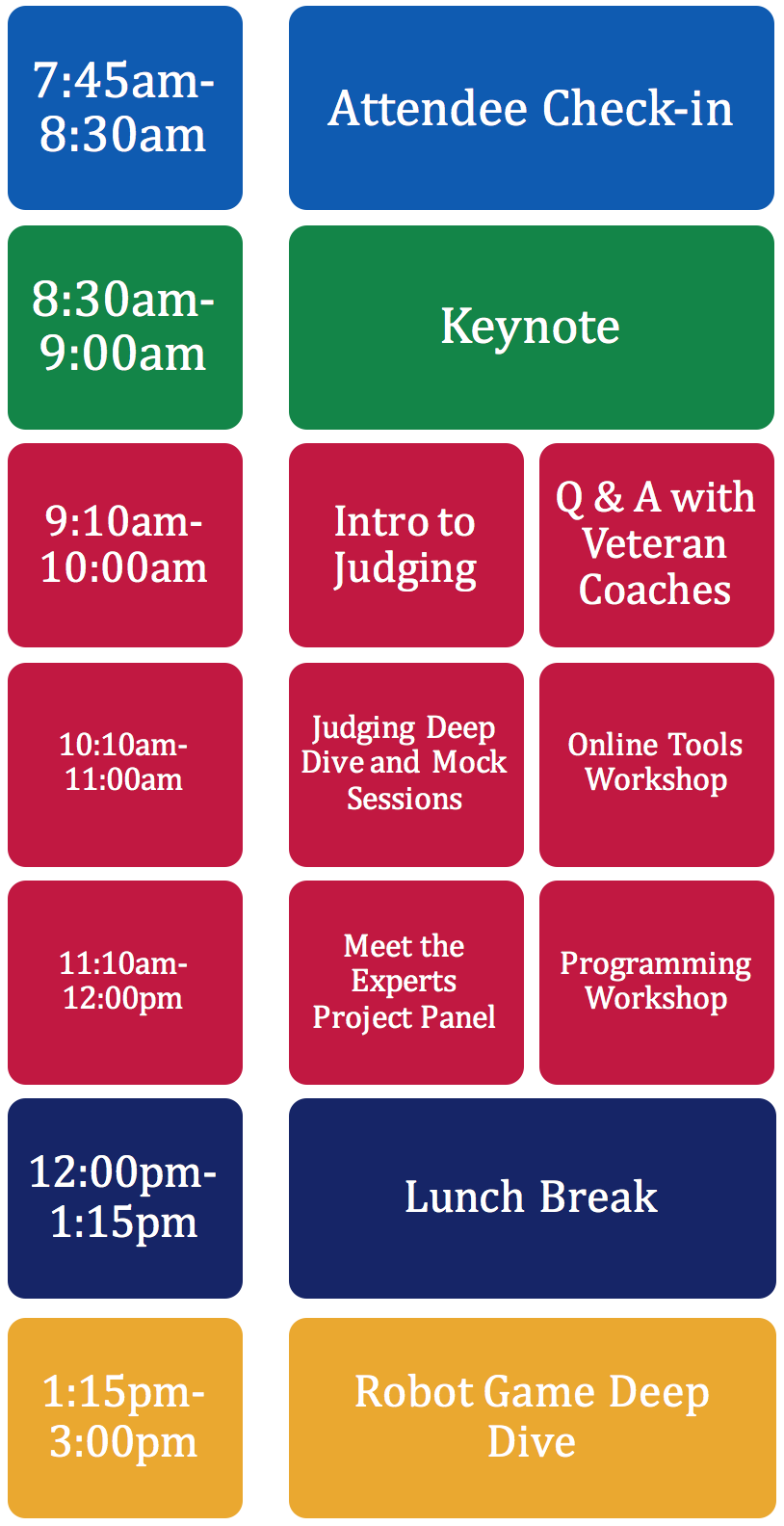 LoCAvoria will be providing food at our Kickoff this year.  They will also be donating part of the proceeds from the day to CVR!  Help support CVR by buying lunch at the Kickoff.  Here is their menu:

Additionally, vegetarian and gluten free options will be available upon request.

Central Valley Robotics will be selling an assortment of shirts from prior FLL seasons as a fundraiser for the upcoming season.  Please check them out near the check-in table on Saturday!

RSVP for the Kickoff!

While optional, we request that all coaches and mentors that plan on attending to please RSVP for the Kickoff. In the event we are over capacity, priority will be given to those that RSVP.
If you cannot see the Eventbrite widget below, please click here to visit the event page directly.

This site uses Akismet to reduce spam. Learn how your comment data is processed.