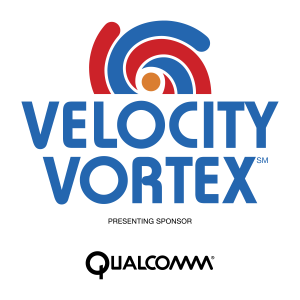 VELOCITY VORTEX℠ presented by Qualcomm® is played on a 3.7m × 3.7m (12 ft. × 12 ft.) square field with approximately 0.3m (1 ft.) high walls and a soft foam mat floor. The field is divided diagonally into a “red” and a “blue” side corresponding to the two alliances. In the center of the field are two goals on a rotatable stand called the Center Vortex. Two ramps, each with a goal, called the Corner Vortex, are placed in opposite sides of the field. The Center Vortex Goals and Corner Vortexes are alliance specific. There are also four alliance neutral Beacons, two placed on each front wall next to the Corner Vortex. There are floor markings as well as Vision Targets placed on the field walls as reference points for robot navigation.

During the Driver-Controlled period, alliances earn points by scoring Particles into their alliance’s Center Vortex or Corner Vortex. Robots may also claim Beacons for their alliance by triggering them to illuminate their alliance color. There is no limit to the number of times that a Beacon may be triggered. At the end of the Game, the color of the Beacon determines the alliance credited for claiming it.

Want to Learn More About the FIRST Tech Challenge?